Suggested Replies (SR) are a way to add prepared responses the user can select from.

In this article, we'll cover the following topics:

Please refer to our documentation on channel limitations, as there are some limitations to the SR functionality, especially if a certain character length is exceeded.

Below, you can see how Suggested Replies might appear to an end user.

In this case, the Suggested Replies are numbers the user can click on. These numbers indicate which topic they would like assistance with based on the list provided in the bot's last message.

Add Suggested Replies to a conversation

To add Suggested Replies to a conversation, you will have to go to a Module's message. Then, in the box below "Suggested replies" on the right, you will need to type each reply you want to be displayed to the end user, pressing enter after each one. 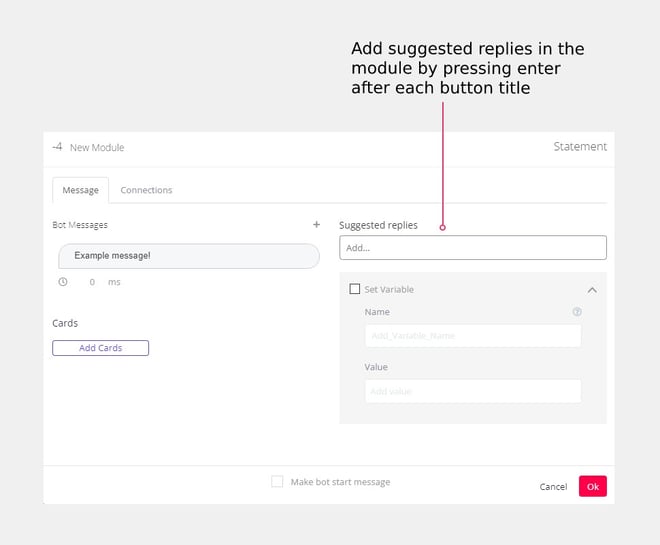 If you'd like to change the order of your Suggested Replies, simply select one and drag it to the desired location.

To add where the newly created Suggested Replies should take the end user, you'll need to edit the connections of the Module.

You can also include Custom Variables (CVars) in Suggested Replies. Applying the List Filter to the CVars allows you to render dynamic Suggested Replies from a Webhook response or lists of values created from the user's conversation with the bot.

Use Suggested Replies in Module Connections

Notice that any Suggested Replies you add within the "Message" tab of the Module will auto-populate as clickable options to establish connections in the "Connections" tab.

Clicking on these will create the first part of the connection, then you can add which Module you would like the user to be sent to by selecting it from the drop-down menu to the right of "Go to".

You can see this below: