Module Connections might seem a bit complex at first glance! But, assuming you've already gained some initial insights about Certainly's Platform, this article will use what we've learned from previous customers to help smoothly guide you through Module Connections.

We'll show you how to:

You can access a Module's connections when you're in edit mode by selecting the Connections tab at the top of a Module's window. If you're not in edit mode, hover over the Module and choose "Edit connection" from the menu that appears above.

The screenshot below provides you with an overview of the Module Connections setup: 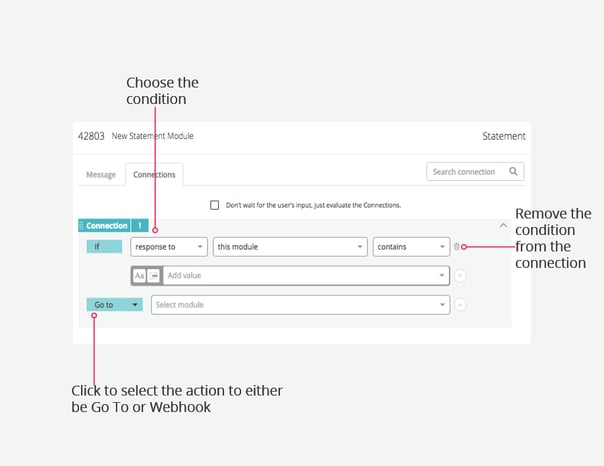 Set up a Module Connection

Before creating a connection, think about the possible end user answer to this Module's bot message.

As the architect of the conversational flow, please remember that end users' answers can sometimes be difficult for the bot to understand. Assuming a worst-case scenario for the end user input will help you equip the bot with the best possible connections.

To add a connection, click "Add Connection". Normally, a connection consists of a condition and an action. However, a connection does not require a condition. In certain contexts, it makes sense to delete the condition, which will be explained in greater detail below.

Note that in the following screenshot, the "Don’t wait for the user’s input, just evaluate the Connections" checkbox is unticked. In other words, the bot waits for the end user's input before proceeding. In those cases, a connection must have some kind of input for the conversational flow to continue. 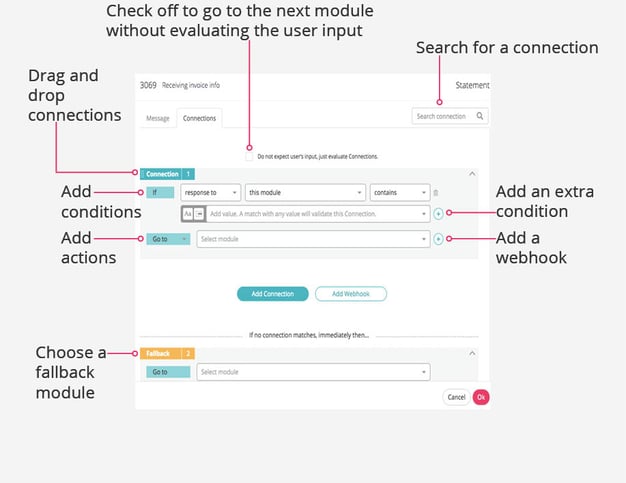 Conversely, if the "Don’t wait for the user’s input, just evaluate the Connections" checkbox is ticked, the bot will act without any user input.

Different types of conditions are supported. However, the majority of conditions break down to the following simple If-clauses for the Module Connection, which we'll review below:

Create a connection based on keywords or Suggested Replies.

Define a connection based on Intents from your AI Manager.

You can adjust the level of confidence with which it must understand the Intent, as well as whether it should only validate if it has the highest AI confidence.

Use Custom Variables as conditions for a connection.

After the "custom variable" condition type is selected, any variables previously defined in a Module Connection or Webhook's response mapper can be chosen from a drop-down menu. Alternatively, you can add a new variable.

There are also Custom Variables that set themselves (meta variables) without any action required of the user.

Below, you can see an example where the "exactly match" variable condition is used.

In this case, we check to see if a Shopify discount code has already been used as part of the checkout process. If the variable code_used exactly matches "true", that discount cannot be applied to the order, so the user is thanked for their purchase and directed to the checkout page.

A/B testing is a common tool for marketers, and you can also use it for your chatbot's messages. Test how different messages work on your end users to find out which one runs best.

In theory, you can compare 101 connections to each other.  This is possible because each A/B connection is assigned a newly created, random ID between 0 and 100 (101 possibilities in total).

Define the condition further by selecting if the ID for that specific selection must equal, must be greater than, or less than the ID selected by using the slider.

By using a filter as part of a connection, you can target a connection based on user segmentation that was previously defined by using the Filter feature.

Send your chatbot visitors to a specific Module based on what channel they have entered the chatbot from. These are the channels you can select for this Module Connection condition:

For more complex conditions, you can also add a Jinja2 template.

This allows for further customization, such as accessing internal Custom Variables like {{certainly.reply}} or the results of a Webhook execution {{wh.response}}.

Each condition requires an action. Set up the action(s) of a Module Connection based on the previously defined conditions, conversational context, and assumed worst-case scenario for the end user's input to that Module's bot message(s).

An action can be to "Go to" another Module (default action), fire a "Webhook", or "Set [a] variable". Change an action by activating the drop-down menu embedded in the action field. Explanations of each action are below.

This action simply requires a Module ID or a Module's name to be inserted in the following "Set module" text field. Clicking in the text field will activate a drop-down menu where you can scroll through all existing Modules. You can type the name or ID number of the desired Module directly into the field.

You are also able to connect to a Module that does not yet exist. Create this new Module directly in the "Set module" text field by selecting "Create New Module".

Inserting a Webhook does not require a condition to be defined. You may delete the condition by clicking on the trash bin icon next to the condition. 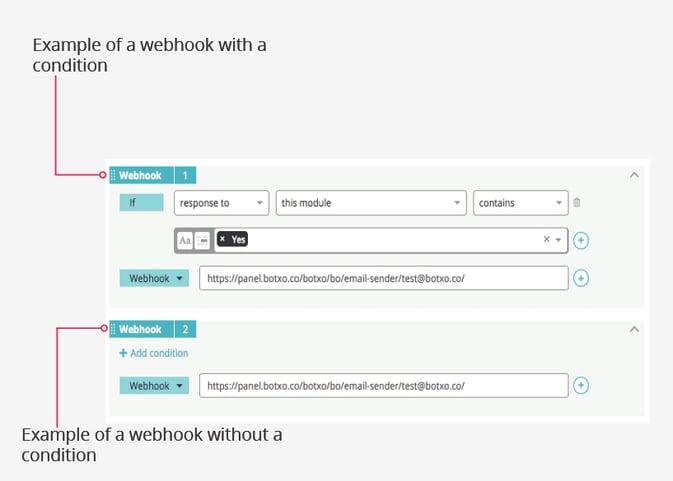 Select or insert the desired webhook in the "Select Webhook" text field next to the action field.

You can create Custom Variables within a Module's connections as well.

You can set as many Custom Variables as you'd like within a Module's Connections. Remember, these Connections can be modified by the If-clause conditions explained above.

Read more about storing the end user reply in a Custom Variable.

In contrast, Module Connections only hold for the specific module you are working on. Here, the bot's actions and/or responses for the next step within the conversational flow are defined. 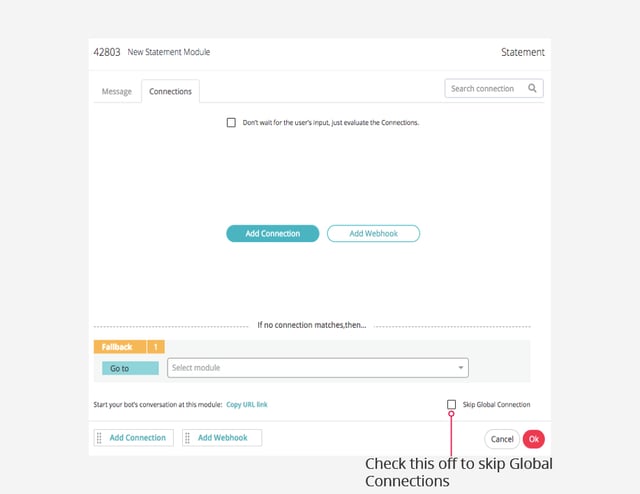